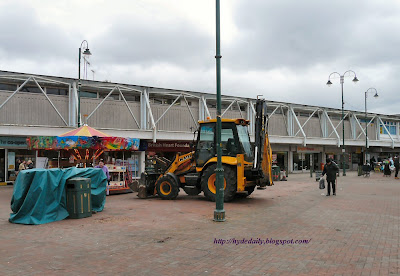 Hyde market is undergoing a revamp this year. It is taking place in two phases so that one half of the market can stay open whist the other half is being worked on.

This was the scene last Tuesday afternoon with a JCB parked near the carousel. The "roundabout" on Hyde Market has been there around a hundred years and it is going nowhere. See it from the opposite direction on Hyde Daily Photo. 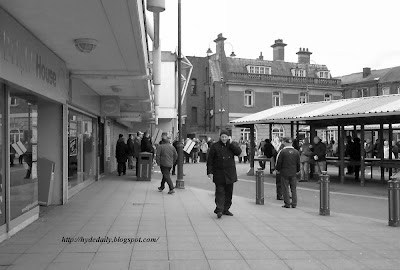 No stall holders opened last Saturday as a few dozen members of the BNP gathered to hold a "rally". Many of the shops on Market Street closed as a precaution but Clarendon Shopping centre and the indoor market were open as normal. Many people shopped early so as not to witness the rally. The BNP joined later with a few hundred members of the EDL for a march from Hyde Central station to the Long Meadow car park from where the police later escorted them back to their homeward transport. Rather more people were at Ewen Fields where Hyde FC beat Droylsden 4-0.
Posted by Gerald (SK14) at 00:00