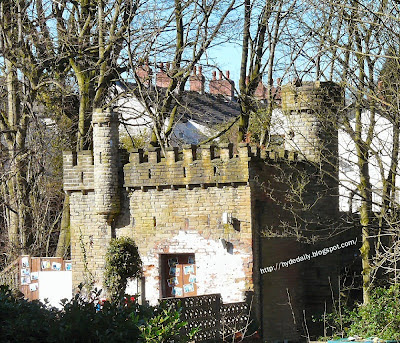 The castellated folly castle overlooking Godley Brook lies in the back garden of Brookbank House. The house was built in 1837 by Joseph Hibbert, the sixth of fourteen children of Randal Hibbert. The Hibbert family of Godley played an important part in the history of Hyde and its neighborhood, figuring amongst the pioneers of the cotton industry.

The castle folly was probably built around the mid part of the 19th century. In the mid-1990s there were plans by the then owners to restore the building and open it up to the public. See Hyde Cheshire.

Now it belongs to the Brookbank Day Nursery and public access to the folly is not permitted. It can however be seen from the footpath on the North side of the Godley Brook.