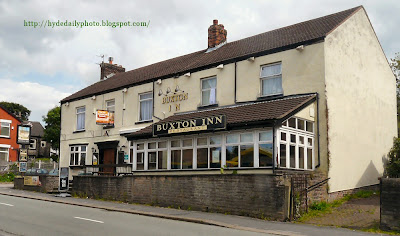 (Click on image to view full-size version)
The Buxton Inn was closed a little while ago but appears now to be "Under New Management". The advertised opening hours when I walked past just over a week ago were "Sundays 11pm - 12am; Friday & Saturday 11pm - 1am" unless I misread them.

In 2007 it included a Thai restaurant.

In 2002 before it had expanded into the adjacent property we had celebrated our wedding anniversary therein.

The sign for the Buxton can be seen on Hyde Daily Photo.