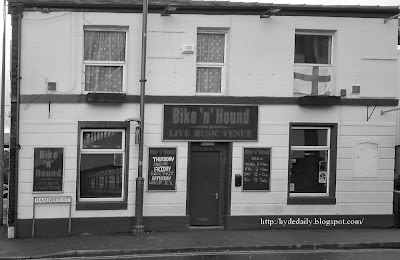 (Click on image to view full-size version)
Originally this was called The Royal Albert and commemorates Prince Albert, the Consort of Queen Victoria, who died in 1861. The beerhouse licence dates back to around 1850. The first owner and licensee was Thomas Bridge, who was there for around ten years. He was followed by a succession of Woods: Samuel (1860-1864),Thomas (1864-1874),Jane (1874-1882), William (1882-1888) and finally Alfred (1888-1890) - quite a family business! After the last of the Woods, the Royal Albert was bought by the Philanthropic Burial Society of Hyde.

It was as far as I recall always the "Royal Albert" until it changed to the "Carpenters", and then the "Bike & Hound". The name the "Red-House" was only a nick name... it was called that after a particular nasty fight which broke out one night... after which the walls were supposedly covered in blood... I know at one time bare knuckle fights were bet on around there... and when the fairs came to town this is where they once drank, and fights were organised and money bet on the outcome... I remember seeing such fights in the 70s.

I managed this pub in 1986-87 when Alf Beeley owned the pub and the "Ten Houses"... It was a villains pub at that time and been so for a number of years, not your mugger or thug villain you get about the town now... These were more career criminals, shop lifters who would call in at dinner time to take orders for goods, conmen planning away in one corner and robbers planning jobs over a game of pool... Many of them were violent men but fights were rare I'm happy to say... It was a strange pub, but I had some good times in there and many a good laugh. I could leave the till open and not a penny would go missing. Any kind of trouble was quickly sorted out for me...

Now as the Bike n Hound the pub has moved on to a new era, it as got to be one of the busiest town centre pubs now.. it is not the biggest pub but can at times pack them in.. Bands are now a regular feature of the place... and of course the bands go hand in hand with the bikers... there's topless barmaids one night a week... I once tried that but was told to put my shirt back on... Charity nights are often held here and do very well... It is not the kind of pub to suit everyone but I have always found it to be a very friendly... and loud place... it is pubs such as this that will help to keep Hyde on the map and not become a 'ghost town' at night. Long may it remain open for business.

See a view of the pub reflected in the windows of the job centre on Hyde Daily Photo.

A contribution to The Weekend in Black and White.
Posted by Gerald (SK14) at 00:00