The Godley to Apethorn Railway Line 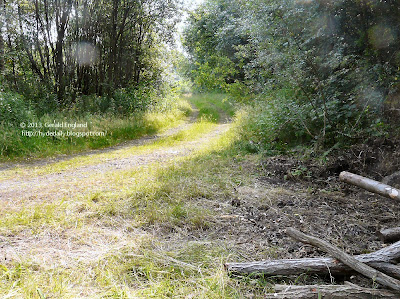 The "Cheshire Lines Committee (CLC)" route from Godley Junction to Apethorn opened in 1866. Following the electrification of the Woodhead line in 1954 and until 1981 when the through route to Sheffield closed, here was where trains to and from the Liverpool district changed from diesel to electric traction. The main traffic on the line consisted of trains from the Yorkshire coalfield to the Fiddlers Ferry power station.

See how it looked here in 2010 on Hyde Daily Photo Volume 1. 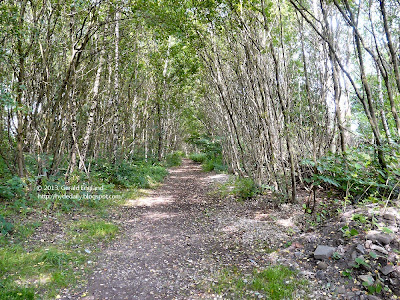 The line was electrified at 1500V DC for a short distance. This was the point where trains heading for Fiddler's Ferry power station via Warrington Arpley would exchange traction - the class 76 electric locos would draw the train onto the branch and un-couple before running around and departing; subsequently, a diesel loco would appear and hook-on for the remainder of the trip. The whole point of the railway was to carry Yorkshire coal to Lancashire for burning in one way or another, and electrification was mandated in the 1930s. After the end of freight services over Woodhead in 1981, the obsolete DC equipment was replaced with 25KV AC between Manchester, Hadfield and Glossop.

This section is now abandoned and seriously overgrown but further down the line the route has been reclaimed by the Trans Pennine Trail and National Cycle Route #62. 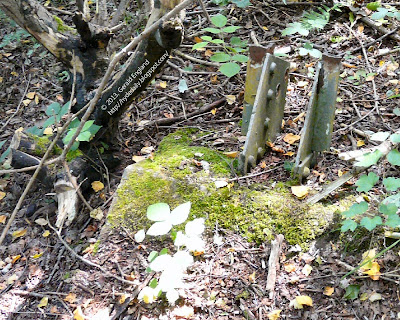 This would appear to be the base of part of the final gantry along the line. It is evident it was probably connected to a diagonal member (empty bolt or rivet holes), which would be needed at a final gantry to counter the unbalanced horizontal catenary load.

Other remnants of the railway remain in the undergrowth and one of them will be featured in posts next week.

Another photograph of the end of the line is on Hyde Daily Photo Volume 2.
Posted by Gerald (SK14) at 00:00