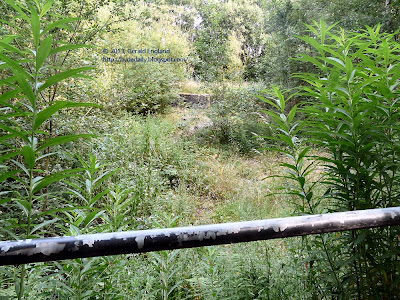 Behind this fence is a former railway turntable on the Godley Junction to Apethorn railway line. The "Cheshire Lines Committee (CLC)" route opened in 1866.

Here is where trains heading for Fiddler's Ferry power station via Warrington Arpley would exchange locomotives. The whole point of the railway was to carry Yorkshire coal to Lancashire for burning in one way or another. Originally the trains were steam hauled but after electrification of the Woodhead line in the 1950s the class 76 electric locos would draw the train onto the branch and un-couple before running around and departing; subsequently, a diesel loco would appear and hook-on for the remainder of the trip. Freight services over Woodhead ended in 1981 and this line became redundant. 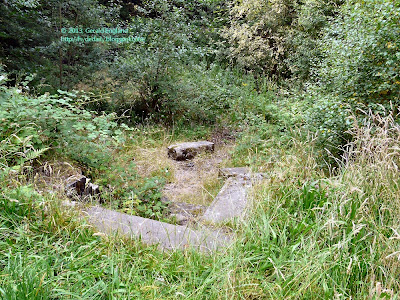 Another photograph of the overgrown turntable can be found on today's post at Hyde Daily Photo.