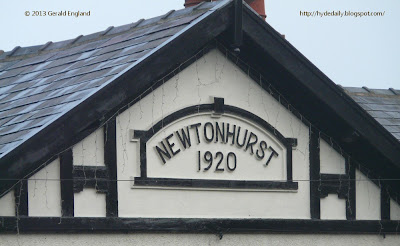 Off Victoria Street, Newton are some rows of terraced housing known as Newton Hurst dated 1920.

According to the Hyde Cheshire blog these houses were built by the now defunct Waldorf Stationary Company of Newton Mill, Ashton Road to house its workers. Apparently these houses are back to front. Before Charlton Avenue and the current estate of new houses was built on the former Newton Hurst cricket ground, a small road on the other side of the houses provided the main access, so what are now the front gardens were originally the back. 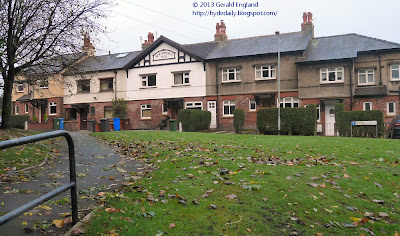 This is the one on the left hand side facing Victoria Street.

See the one on the right hand side on Hyde Daily Photo.

A contribution to ABC Wednesday and signs, signs.
Posted by Gerald (SK14) at 00:00