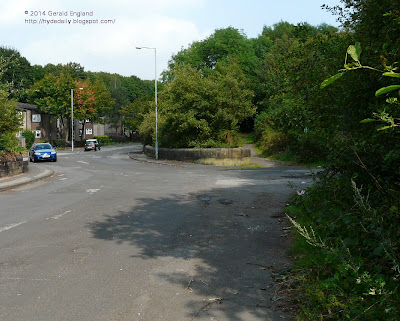 Commercial Street starts at the bridge over the Godley Brook immediately after the confluence of two branches of the brook. The branch coming in from Matley moor lies between Commercial Street on the left and the footpath on the right which crosses of the other branch through Godley Vale which is culverted under the M67 which is just out of view on the right. Hoviley Brow in the foreground used to run all the way into Hyde before the coming of the M67 motorway.

See the view in the opposite direction on Hyde Daily Photo.

A contribution to Shadow Shot Sunday.
Posted by Gerald (SK14) at 19:44