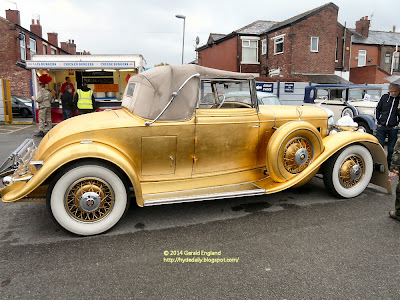 This was one of the vehicles on show at the classic car rally held recently at Ewen Fields in aid of SSAFA a charity that provides practical support and assistance to servicemen and women, veterans and their families.

The 1931 Cadillac Fleetwood Drop Head Coupé features 23.75ct gold leaf-clad bodywork, silver external door handles and 24ct gold-plated internal door handles. These embellishments were added during a lavish, three-year project carried out in the 1970s by the then-owner, Jack Smith of Kansas, USA. The gold leaf coachwork is offset by white leather upholstery. The gear lever top used to be gem-studded platinum. Under the bonnet is a 5.7-litre V8 engine, mated to a three-speed manual transmission. 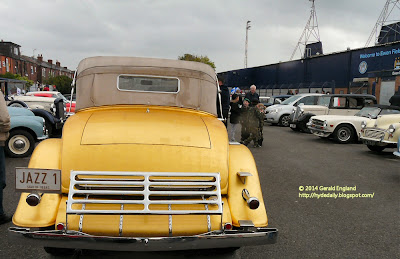 According to a news report in The Telegraph it failed to attract a buyer when put up for auction in September 2013. It now appears to belong to "Mike & Shaun's classics".

A photograph from the front can be found on Hyde Daily Photo.

A contribution to Monday Mellow Yellows.
Posted by Gerald (SK14) at 00:00