Twiggy at Mottram in Longdendale. 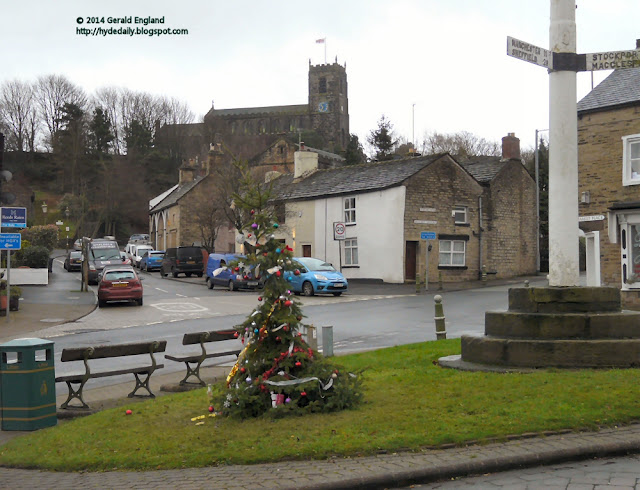 This Christmas tree on the Market Place at Mottram in Longdendale was branded the worst in Britain when it was planted by Tameside Metropolitan Borough Council. Villager Emma Purcell created the Facebrook Group The Embarrassment of Mottram Christmas Tree as a place for members past and present of Mottram community to air their anger and views about the size and quality of the Christmas Tree, believing they deserved bigger and better! However once the anger had dissipated, "Twiggy" as it has come to be known has brought the community together.

A charity night was organised with entertainment in the nearby White Hart and carol singing on the Market Place raising money for Reuben's Retreat.

The Crown Pole on the right was originally erected in 1760 to commemorate the coronation of George III.

In another response to the plight a larger tree was donated to the village by B&Q and has been installed outside the church of St Michael and All Angels on the hill.

For a time there was a Santa on one of the benches but he doesn't seem to have survived the ravages of the wet and windy weather.

Another view of the tree can be seen on Hyde Daily Photo.