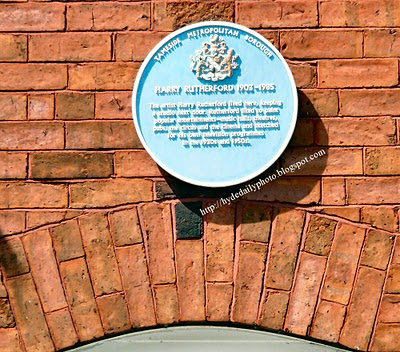 A duplicate plaque can be found at the entrance to Hyde Town Hall.

Harry was born in Denton in 1903 where his father, William, had a hatting business. William himself was a gifted amateur artist and with a group of friends had formed the Hyde Art Group. His three brothers were Bob who became a script writer, Donald, a musician who, because of a weak heart, changed to repairing and tuning pianos, and George, the eldest, whom Harry described as a "born philosopher".

During his childhood the family moved from Denton to New Mills then to Hadfield and then settled in Hyde at 17 Nelson Street. Harry's affection for his family home is clear as he nicknamed it "sweet seventeen".

While still at school Harry attended the Hyde School of Art on Saturday mornings. On leaving school aged fourteen he continued to develop his skills through evening classes at the Manchester School of Art where he met another artist L.S. Lowry.

Although his career often took him away from this area, he always returned to his northern roots and he was a familiar figure in Hyde. The Clarendon public house was his "local" and many of the regulars there featured in his paintings. He had a simple philosophy of life summed up in the phrase "Thou shalt be interesting".

He loved to sketch ordinary people and his favourite party trick was to draw someone's likeness whilst keeping the paper and pencil in his pocket.

Harry's painting "Saturday Afternoon", now called "Northern Saturday" depicting Hyde town centre, is arguably his most famous. It was acquired by Hyde Corporation in 1948. Harry is also remembered for the impressive mural depicting scenes of the town that he painted in Hyde Town Hall for the Festival of Britain in 1951.

More information about him can be found on the Tameside MBC website.