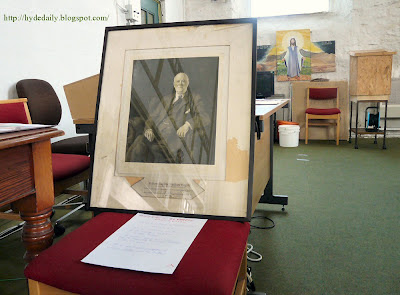 (Click on image to view full-size version)
One of the exhibits at St George's Church on the Heritage Open Day last week was this photograph taken in 1923 of William Garside Phillips.

The great great grandfather of Zara Phillips was a scholar and secretary of St George's Church and Sunday School, supporting the church liberally for 50 years.

He was the son of John Phillips, collier, of Cheapside, Hyde who had married Eliza Wilde, a hatter's daughter, in 1844. In 1871 he married Emma Grundy, daughter of William Grundy, wheelwright, of John Street, Hyde. He went on to be a colliery manager and mining engineer at Ansley Hall, Warwickshire.

In "The History of Hyde (St George's) Church and Schools" (1911), Thomas Middleton writes


Mr W G Phillips began his connection with St George's in 1862, and was for some years a teacher. He was School Secretary for a short period ... but had to resign his work ... on account of leaving Hyde about 1873. Mr. Phillips is one of the best types of self-made men. Beginning life as a working collier, he is now managing director of the Ansley Hall Colliery, Atherstone, Warwickshire, and he owes his success principally to his grit and steady perseverance. He is a Justice of the Peace for the County of Warwickshire, Vice-Chairman of the Board of Guardians and Rural District Council of Atherstone, Chairman of the Parish Council of Ansley, and President of the Midland Counties Institute of Mining and Mechanical Engineering.

See a closer view of the photograph on Hyde Daily Photo.