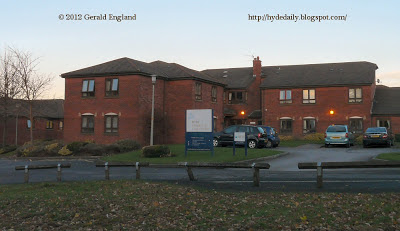 (Click on image to view full-size version)
Hyde Nursing and Care Centre operated by Meridian Healthcare Ltd was built in the 1980s on the site of Wards 1-3 of the former Hyde Hospital.

As I showed in my post of 27th November Ward 4, known as the TB ward and some smaller buildings which had continued to be used by some ancillary services until 1996 are now being demolished.

The hospital Lodge, which you can see on Hyde Daily Photo, unless I've been misinformed is used by Meridian as offices.
Posted by Gerald (SK14) at 00:00