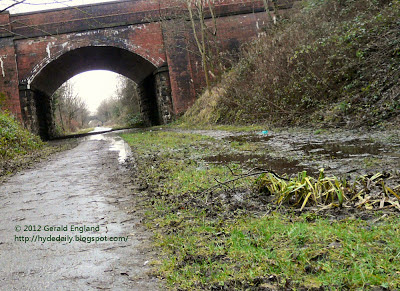 Hyde Daily Photo of the Year 2012 featured a dog and the puddle under Dowson Road bridge over the the former Godley Junction to Apethorn railway whose route is followed by the Trans Pennine Trail and National Cycle Route #62.

That was taken in June. This was taken shortly after midday on Christmas Day.

On Hyde Daily Photo see how it looked from the other side of the bridge a week later on New Year's Day with another dog and his mistress.

A contribution to Sunday Bridges at San Francisco Bay Daily Photo.
Posted by Gerald (SK14) at 00:00