Signs on the Trans Pennine Trail 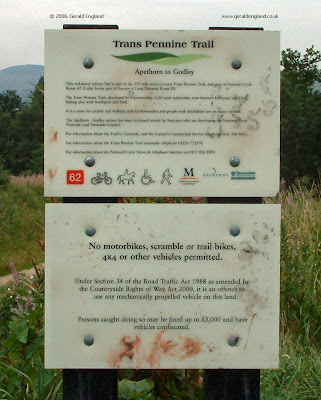 These signs appear on or near the Apethorn to Godley section of the Trans Pennine Trail. This one I photographed near Donald Avenue in 2006.

The top notice explains that this reclaimed railway line is part of the 350 mile coast to coast Trans Pennine Trail and part of National Cycle Route 62. It also forms part of European Long Distance Route E8. It is a route for cyclists and walkers, and for horseriders and people with disabilities too on many sections.

It says a bit more but that's enough for now.

The bottom notice says that "No motorbikes, scramble or trail bikes, 4x4 or other vehicles permitted. Under Section 34 of the Road Traffic Act 1988 as amended by the Countryside Rights of Way Act 2000, it is an offence to use any mechanically propelled vehicle on this land. Persons caught doing so may be fined up to £5,000 and have vehicles confiscated."

There have been incidents of motorbikes being used on the trail, mainly by youngsters displaying little respect for other users. The problem has been tackled in some measure by making access to the trail at several points rather difficult but all that does is make it difficult for disabled users in wheelchairs whilst the bikers find alternative routes.

These notices and a conventional signpost can be found at Green Lane - see Hyde Daily Photo.

A contribution to signs, signs.