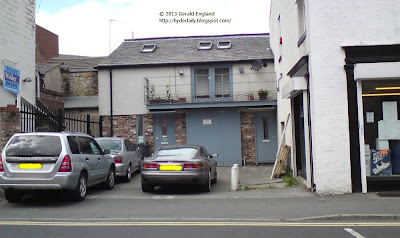 At the turn of the century, 3 Hamnett Street (which seems to have acquired an extra terminal "t" over the years) was Fowden's Undertakers.

Although still listed as such in many online directories, it hasn't been an undertakers for some years and is now the home of a hydroponics business. On the left and set back from the street are properties 1 and 3a Hamnett Street.

My understanding (although I've lost the source of my information) is that this building was originally part of the funeral business but 3a is now an office of charted architects Davenport and Flinn a business started by Peter Davenport in 1960, established as a partnership with John Flinn in 1975 who now runs the business solely after the former partner retired in 1989.