The view from Broomstair Bridge 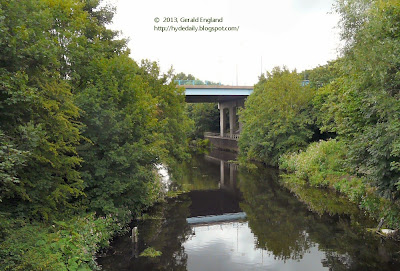 For the 12 years following 1974 the county had a two-tier system of local government; district councils shared power with the Greater Manchester County Council. The county council was abolished in 1986, and so its districts (the metropolitan boroughs) effectively became unitary authority areas. However, the metropolitan county has continued to exist in law and as a geographic frame of reference. As a ceremonial county, it has a Lord Lieutenant and a High Sheriff. Several county-wide services were co-ordinated through the Association of Greater Manchester Authorities up until April 2011, when the Greater Manchester Combined Authority was established as the strategic county-wide authority for Greater Manchester, taking on functions and responsibilities for economic development, regeneration and transport.

This view from Broomstair Bridge shows the M67 motorway crossing the river.

See the view in the opposite direction on Hyde Daily Photo.

A contribution to Scenic Weekends and Sunday Bridges at San Francisco Bay Daily Photo.
Posted by Gerald (SK14) at 00:00