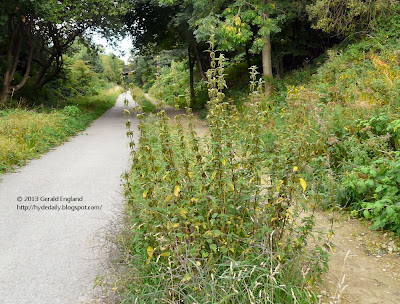 A clump of tall growing stinging nettles on the Trans Pennine Trail.

Stinging nettle or common nettle, Urtica dioica, is a herbaceous perennial flowering plant, native to Europe, Asia, northern Africa, and North America, and is the best-known member of the nettle genus Urtica. They have many hollow stinging hairs called trichomes on the leaves and stems, which act like hypodermic needles, injecting histamine and other chemicals that produce a stinging sensation when contacted by humans and other animals.

Look but do not touch.

Take a closer look at the flowering seeds on Hyde Daily Photo.
Posted by Gerald (SK14) at 00:00