1000 Millennium cast iron mileposts were funded by the Royal Bank of Scotland to mark the creation of the National Cycle Network, and they are now to be found along the cycles routes throughout the UK.

Six new mileposts are being erected on this stretch of the Trans Pennine Trail alongside the former Godley Junction to Apethorn railway line.

I expect it will be coloured over in the next few weeks. 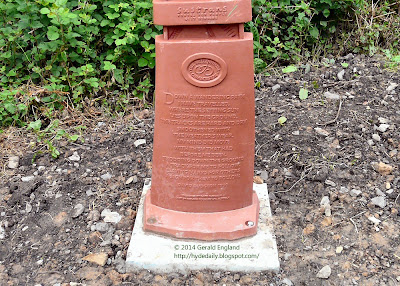 This one is designed by David Dudgeon.

The inscription on the lower half of the signpost reads:

DOWN A WANDERING PATH
I HAVE TRAVELLED,
WHERE THE SETTING SUN
LIES UPON THE GROUND,
THE TRACKS ARE HARD AND DRY
SMOOTHENED WITH
THE WEATHER'S WEAR
MY MIND DID MOVE
WITH THEM THAT HAD
BEFORE ME BEEN,
TRODDING DOWN THE GROUND
A TRACK FOR ME TO FOLLOW
LEAVING MARKS FOR OTHERS
A SIGN FOR THEM TO FOLLOW.

A fuller view of the milepost can be found on Hyde Daily Photo.