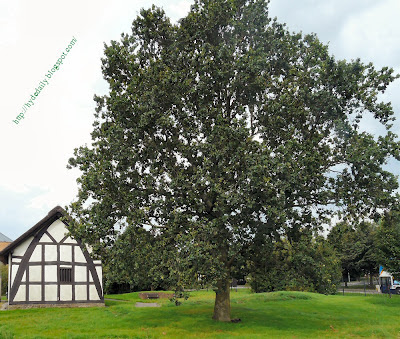 This photograph and another on Hyde Daily Photo were taken at the recent Heritage Open Day where some of the finds from the archeaological dig were on show.

Newton Hall, a Grade II listed building and one of Britain's earliest cruck-framed buildings, stands on the corner of Dukinfield Road and Dunkirk Lane in Hyde, Cheshire. It eventually became used as a barn for the farm that occupied part of the site. It was encased in a brick building having a blue slate roof. When the farm buildings were being demolished in the 1960s, to make way for industrial buildings, the contractor saw the ancient cruck-framed construction and, realising it was an important ancient building, stopped demolition immediately. The other farm buildings were later demolished but the original medieval hall was preserved. Sir George Kenyon, the Chairman of William Kenyon & Sons Ltd of Dukinfield, rescued it. Browns of Wilmslow undertook the restoration work and this was completed in 1970.

During the restoration work, a large glass panel was inserted into one side the purpose of this being twofold. It allows sufficient light into the hall so that it can be used for modern purposes such as holding conferences, seminars and meetings and it also allows the construction of the building to be viewed from the outside. It now has a stone flag floor with under-floor heating, whereas originally it would have had an earthen floor.

In April 2012 Tameside History Forum in conjunction with Salford University undertook an archaeological dig at the site. Over 500 photographs of the excavation can be found on their Photobucket gallery.

A contribution to Green Days on Raindrops & Daisies.
Posted by Gerald (SK14) at 00:00